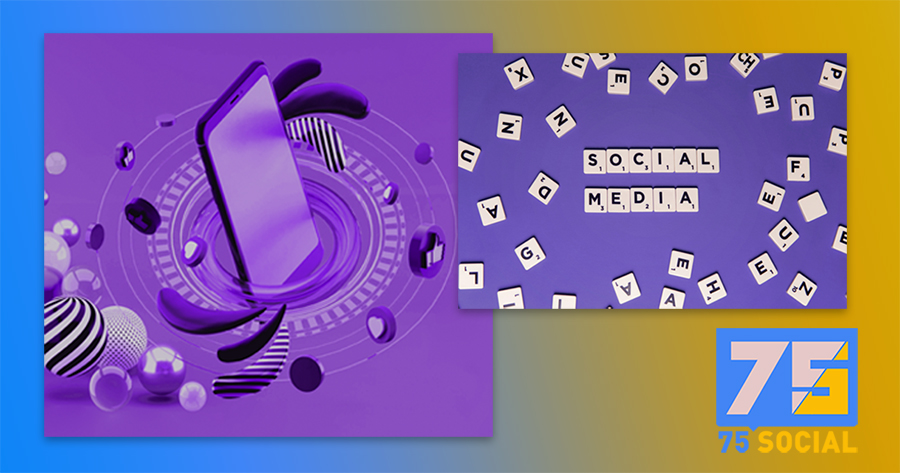 To be in the know of what’s new in social media, one has to take a wider perspective of consumption trends and carefully look into how people use different social media platforms to connect in various ways. Remember that a careful analysis of such trends will let you arrive at key findings that are beneficial to your brand or business. This will allow you to maximize your efforts in social media marketing, which in return will help drive more revenue into your business.

App Annie, a mobile data and analytics company, recently released its “Evolution of Social Media Apps” report which highlighted the importance of understanding the dynamic trends of the digital environment. The report also looked closely at how social media usage trends have grown over these last 10 years, putting an emphasis on the growing appeal of digital live streaming, and the rise of TikTok among others.

The report’s primary focus is on the rapid increase of consumer spending in social media platforms with a whooping cumulative spend of $3.2 billion during the first half of 2021 – up 50% year-over-year. This is the critical shift in today’s consumers buying behavior as more and more businesses put their brands online, especially on various social media platforms.

One aspect to note is the social interactions restrictions during this COVID-19 pandemic have forced businesses to temporarily close their physical stores, which made them switch to online business. It likewise had a significant effect on users who see these platforms as their outlets as during a long period of lockdown. 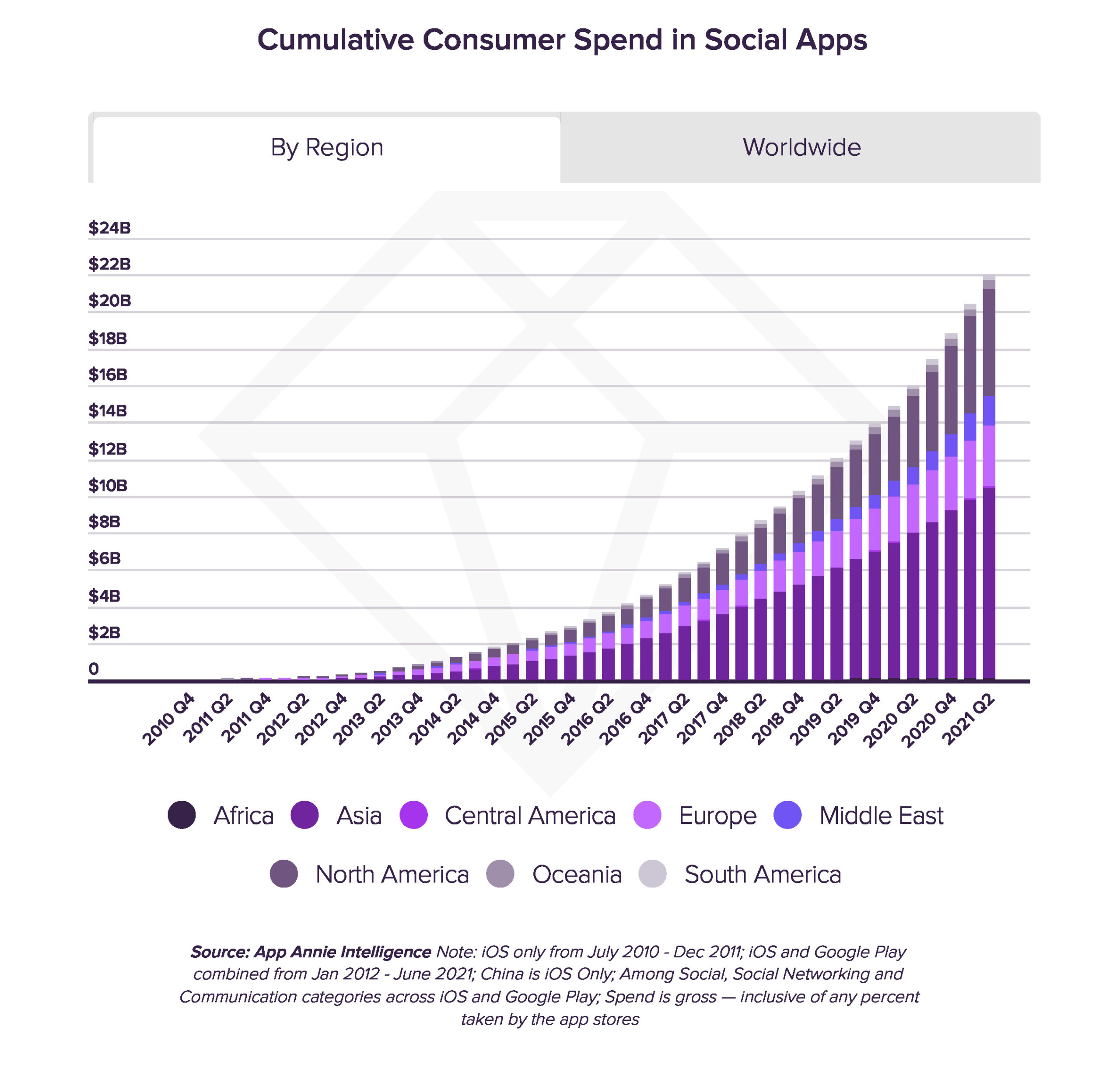 As shown in the chart above, Asian markets — with a high concentration in India — have widely adopted social media to eCommerce, whether B2B or B2C. This latest trend has manifested the rapid increase in in-app spending with a $6.78 billion projection for the whole year according to App Annie.

App Annie also projects the continuous rise of social app spending with an annual growth of 29% moving forward. It is expected that in-app spending will reach an impressive $78 billion by 2025.

What’s more, the data also shows that live streaming apps surpass chat and photo and video social apps, which will definitely convince brands to put their business on live streaming platforms. This data emphasizes the importance of driving growth in user engagement. It allows brands to expand the active virtual interactions with their consumers into direct in-stream spending.

Suppose you are still adamant about setting up a business profile on Facebook and Instagram Shops after all these years, or you’re not aware of the innovations of TikTok’s eCommerce push. In that case, these graphic representations of social apps market trends might convince you. 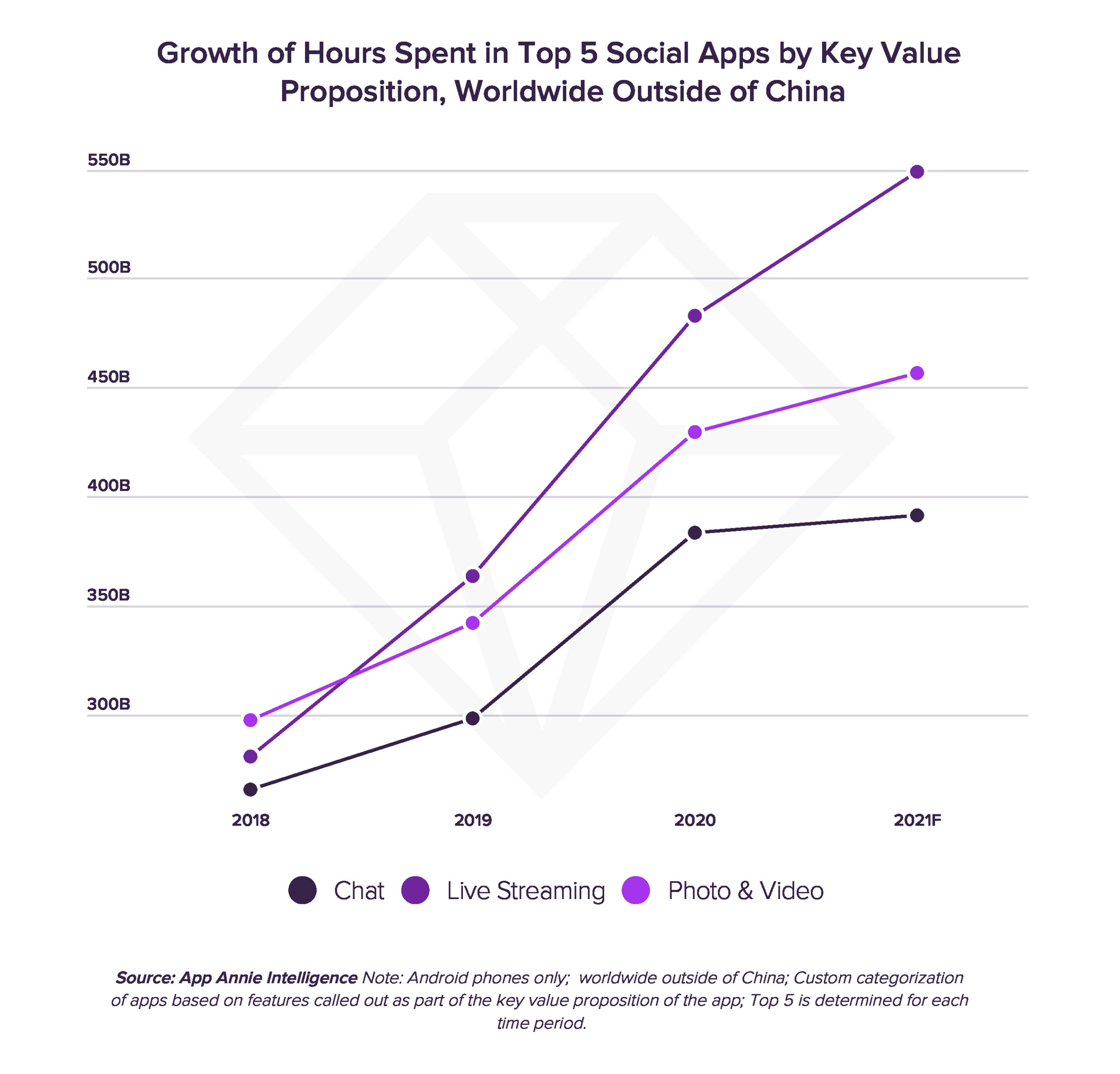 According to the report:

“Total time spent in the top 5 social apps with an emphasis on live streaming is set to surpass half a trillion hours on Android phones alone, outside of China in 2021, a 3-year compound annual growth rate of 25% compared to 15% for chat and photo & video apps.”

This graphic representation signifies an interesting shift from public broadcasting of thoughts and opinions to messaging and private groups. Facebook is the forerunner in encouraging this type of user engagement and interactions.

When you are active on Facebook, you have probably noticed the rise of private, closed, or public groups encouraging people’s interactions with diverse but common interests. This can be a valuable tool for marketers and brands as more businesses start creating communities through Facebook groups.

As mentioned above, the COVID-19 pandemic is one of the key drivers of live streaming being the frontier in social media in today’s trend. This drastic rise has to do with replacing physical, social interactions with in-stream online streamer-viewer interactions. In this case, socializing in the digital world, such as live-streaming and Metaverse, is projected to sustain even in a post-pandemic environment.

The latest trend also highlights the in-stream spending: “Social apps that offer live-streaming as a prominent feature account for $3 of every $4 spent in top 25 social apps in H1 2021,” as per the report.

As the rise in live streaming continuously surges in Asia, particularly in gaming, a large portion of in-stream spending is on virtual gifting as viewers spend a significant amount of money supporting content creators.

Unfortunately, as observed in the data, these trends have yet to gain traction in western regions. However, this trend points to significant opportunities for markets in West and Asian regions to build a community, allowing brands to facilitate in-stream transactions.

App Annie’s report also notes the rise in the popularity of TikTok in both US and the UK, even surpassing YouTube in terms of average monthly time spent in-app per user. 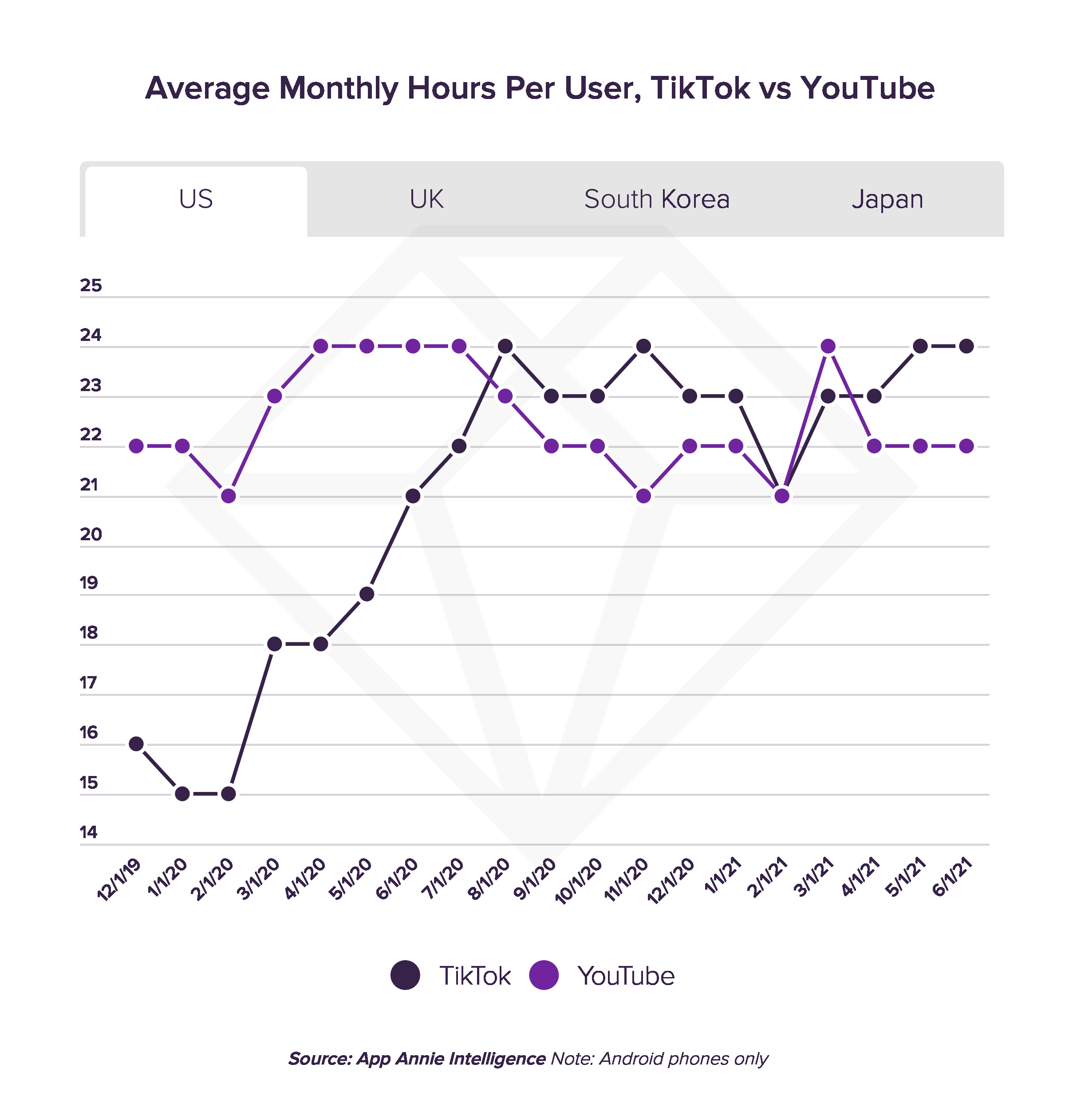 With the remarkable growth of TikTok, adding eCommerce functions is considered a significant push. This can benefit the platform and its top influencers because it will attract more brands and consumers.

TikTok is known for its short videos, which can limit ad opportunities for brands. In that sense, Facebook and YouTube can offer better opportunities for marketers to maximize ad potentials as these platforms allow short and lengthy ads.

Nevertheless, TikTok has taken innovations to establish a better and more direct connection between brands and creators or influencers, focusing on having a live streaming function and experimenting on longer videos to provide various ad opportunities to brands and businesses.

With its linkage to the Chinese Government, TikTok is seen as a platform posing threats to security to the U.S. Government and other nations. This security concern still lingers, especially in countries that do not have direct ties with the Chinese Government, preventing the app from maximizing its eCommerce potential. However, TikTok has already made in-app purchases to Chinese markets and is slowly taking steps on integrating this function to neighboring Asian countries and, eventually, the whole world.

Even with this significant impediment to its potential, TikTok is undoubtedly the winner in the ever-competitive digital space as it tops the download rankings in social and entertainment apps over time.

With the drastic rise in Asian markets, especially in India, the latest innovations and features on popular social media platforms are not even focused on western countries and others. Because of great growth potentials, social apps are expected to align their eCommerce push and in-app functions favorable to Asian markets.

Even though these social apps’ function updates and innovations might seem useless on your part, they will be of great use in other regions. If the US and UK adopt these trends, these are just a bonus on both social media platforms and businesses.

If you want to get on a track where social media innovations are headed and what platforms will stay relevant in the future, consider analyzing the Asian adoption trends and focusing on China’s eCommerce trends with its exclusive digital space.

Though it might be irrelevant on your part, remember that market trends in Asian markets pose great potentials, which, with careful analysis and consideration, can be beneficial in western markets as well.

Read the full report of App Annie here. And for more about the latest in social media, please follow 75 Social on the following platforms.